Here's a photo of my laptop: 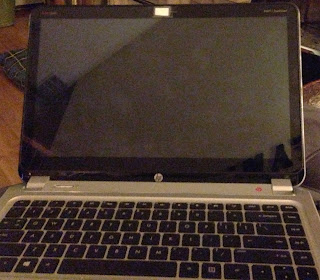 As you can see, I have a piece of paper taped over the built-in camera/webcam. There's a good reason for this.  Last year, I had the opportunity to visit a Cybercrime Investigation Unit at a State Police facility.  I took part in an informative Homeland Security briefing about the various dangers that exist from hackers who attack computers in the United States.

The briefing was eye-opening and scary.  One of the things we talked about was the way that hackers can remotely access the camera on your computer and spy on you without your knowledge. This is not science fiction or a weird rumor: it's a fact.

Here's a link to the Ars Technica website with an article about this disturbing practice, known as "RATing": http://arstechnica.com/tech-policy/2013/03/rat-breeders-meet-the-men-who-spy-on-women-through-their-webcams/

The investigators I met advised that if you have a camera built in on your laptop or tablet, take immediate steps to disable it, and make sure you keep your computer's firewall secure at all times.  Check frequently for updates, and run anti-virus software automatically.

If you need a quick, low-tech solution, you can do what I did: grab a piece of tape and a scrap of paper and stop these criminals from invading your privacy!

Indoor S'mores in a Toaster Oven

Traditionally, s'mores are made while sitting around a campfire with your Girl Scout troop, and the recipe couldn't be simpler: a piece of Hershey's milk chocolate topped with toasted marshmallow and sandwiched between two graham crackers. 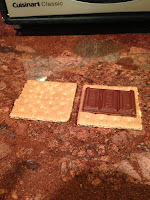 S'mores are a fun dessert that my kids love making all year 'round, not just in the summer. The problem has always been finding a way to toast the marshmallows just right, without burning your fingers or scorching the marshmallows. We've made them over the burners on our gas stove, and inevitably, the marshmallows either catch fire or take FOREVER to toast up, and it's really tough to brown them evenly.  We've tried toasting them over a fire in our fireplace, but you need to sit close in order to get a nice brown on the marshmallows, and when you do that, the heat coming off the hearth gets uncomfortable quickly.

Fortunately, I finally found a method for browning the marshmallows that works really well, using the toaster oven.  You start with the usual: a graham cracker with chocolate candy bar pieces on top. 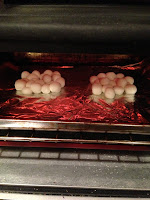 Then, lightly spray an aluminum foil-lined tray with non-stick cooking spray, and arrange mini-marshmallows in little groups on top.  Set the toaster oven to Bake at 400 degrees Farenheit and place the tray in the oven.

VERY IMPORTANT: you must hover over these marshmallows and watch them really carefully. They take just a few minutes to start browning, but once they do, it takes less than 30 seconds to get dark brown. You need to watch them constantly, and as soon as they start to fatten and plump, grab a potholder and get ready. Open the oven to take a peek (it can be hard to see them browning at first) and then check them every 10 seconds until they're nice and toasty brown.

The tray will be HOT, but it's best if you work quickly at this point.  Holding the corner of the tray with one hand, use a spatula to scrape off a group of marshmallows and place them on top of the chocolate and first graham cracker. Then top with the other cracker and press lightly.  The heat from the marshmallows will melt the chocolate just right, and you'll end up with a perfectly ooey, gooey snack. 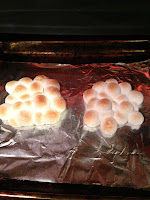 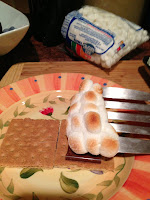 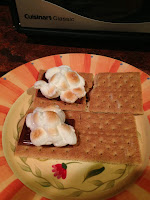 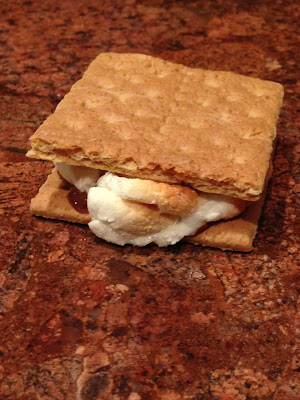 iPhone 5 -- Volume Down Button not working?

Last September, I finally upgraded from my ancient Blackberry to an iPhone 5.   I still miss typing on keyboard buttons, but other than that, the phone has been great.

Lately, however, I've experienced two issues: the Home button doesn't always work when the phone is in "lock" mode.  I used to be able to press it and see the lock screen light up, but it stopped working.  I was able to work around it by pressing the power button lightly instead, so I didn't bother contacting Apple about it.

Then more recently, the Volume Down button on the side of the phone stopped working. Volume Up was just fine, but I could not lower the volume on the phone unless I clicked on iTunes, went to a song, and slid the volume control manually.

I did a quick search on the Apple support forums, and found that this is a common issue with the iPhone 5.   So, since my phone was still under warranty, I made an appointment with the Apple Genius Bar to have the phone checked out.

The tech took a look, and within a few seconds, he said, "Okay, it's a physical problem with the button, so we're giving you a new phone." I had already backed up everything on my computer the night before, so after erasing everything on the old phone, he handed me a brand new iPhone 5, just like that.

If you're experiencing the same issue, get to an Apple store while you're still under warranty. Just make sure you back up all of your data and pictures first!

**UPDATE**:  Just wanted to mention that if you are purchasing electronics, it's always best to use an American Express card whenever possible. They have an "extended warranty" program that was a godsend for us when my daughter's iPhone 5 cracked and wasn't working properly.   Her 1-year warranty had already expired, but we contacted AmEx and they paid for her to get a replacement phone from Apple.  Something to keep in mind! 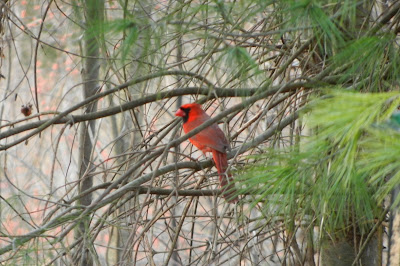