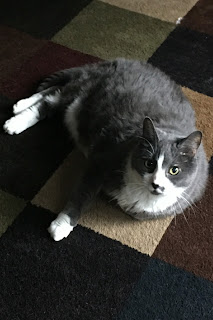 Mittens Cupcake Yakomin,  a.k.a. "Boy-Boy" passed away peacefully today at the impressive age of 19.  He leaves behind his loving mother, Amy, his doting aunts Christina and Cathy, his grandparents Lisa & Rich, and a large extended family that adored him.

Mittens lived a long and happy life, filled with countless kisses, cuddles, and scratches behind his ears.  In his kittenhood, he quickly learned about gravity after diving off the second floor of his Woodcliff Lake home down to the family room below.  He survived the fall, decisively disproving the adage that "cats always land on their feet" by landing solidly on his nose.  This resulted in a slightly crooked, Rocky Balboa-esque profile that he proudly used for "badass street cred" amongst his housecat contemporaries in the years that followed.

He was not a fan of "human food" unless it was being actively consumed by a human who did not wish to share it, at which point he would relentlessly stick his face into whatever vessel was holding the food in order to inspect it properly.  Vanilla frosting, hot coffee, ramen noodles, and bagels with cream cheese were particularly unsafe in his presence.  He was also known to enjoy a roll on the floor with a catnip toy now and again, but always knew his limits and never overindulged.

To fully understand what a fixture Mittens was in the Yakomin Family household, one must consider all that he witnessed during his 19 glorious years of life.  When he was born on April 4, 2000, the Twin Towers still graced the NYC skyline,  the average cost for gasoline was $1.26 a gallon, and President Bill Clinton was serving his final year in the Oval Office. On the home front, Amy was still a few weeks shy of her 4th birthday, Christina was 5, and Cathy was not even born yet.  During his lifetime, he shared in every important milestone, from Baptisms and Graduations to Driver's Licenses and College Acceptances. Through it all, Mittens was there, reminding us that no matter what was going on in our lives, he was not particularly impressed by any of it.

Officially adopted on June 10, 2000, he became the first of many pets to join the Yakomin household, and with each new addition, it became his mission to outlive every single one of them.  In this, he succeeded.

Mittens was predeceased by his hamster siblings Melissa, Squeaky, Cinnamon, and Berry, fire-bellied toads Emily and Elizabeth, guinea pig Crystal, sister-cat Tiger, brother-dog Scooter, and as Mittens was often fond of saying, "so many damn tropical fish it was never worth learning any of their names, quite frankly."

His hobbies included eating, sleeping, relaxing, eating, watching TV, using the litterbox as soon as company arrived, eating, and alerting everyone within a 5 mile radius when his food bowl was empty.  In his prime, he tipped the scales at 16 pounds, eventually becoming so overweight he took to simply ripping out stray clumps of fur and spitting them on the floor in large piles, as the elaborate stretching involved with grooming oneself proved cumbersome and, in his opinion, gratuitous.

He did not fear the vacuum cleaner, never swallowed pills no matter how cleverly they were disguised, and enjoyed taunting the birds outside with a hard stare while making a creepy clicking sound.  He found laser pointers entertaining and spiders delicious.  He avoided movement as much as possible, and shifted couch position only when necessary.

Most of all, Mittens was a steady and constant presence of love and devotion for his family members for nearly two decades, and his loss, though not unexpected, is heartbreaking for us. The depth of our grief at his passing is exceeded only by the enormous love we had for him, the limitless joy he brought to our family, and the enduring blessing that his memory will bring in the years to come.

Yes, even our birds are allies! 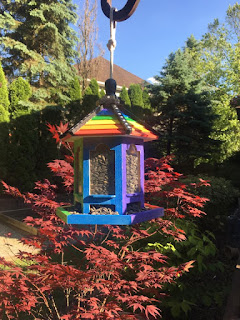 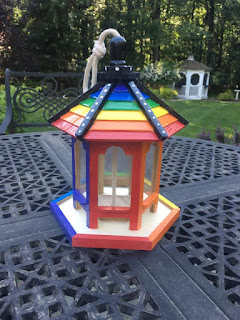 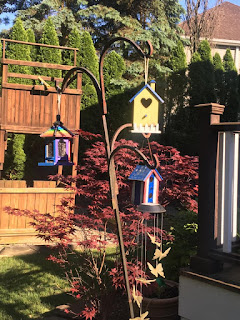