The Upside of Ebola Hysteria?

I know this is SO wrong, but it occurred to me this morning while I was cleaning the tiles in the shower: all it would take is one anonymous tip called in to the CDC, and I could probably have a whole crew here scrubbing everything down with bleach for me.

I'm not saying anyone should panic, but as someone who was born and raised in NYC, I know how germ-ridden the subways can be, even without an Ebola-infected person riding the lines.  The surfaces (handrails, seats, etc) are a common germ collector, and with 6 million riders a day using the NYC subway, this latest healthcare worker was truly irresponsible in using mass transit while he was still in the "watch" period.

It's irritating to see yet another trained, seemingly intelligent health care worker take such unnecessary risks.  This isn't the flu we're talking about--it's a deadly virus that has wiped out entire villages in Africa. I can understand not wanting to disrupt your everyday life, but getting on an airplane, or a cruise ship, or riding the 5th largest subway system in the world? Pure stupidity. 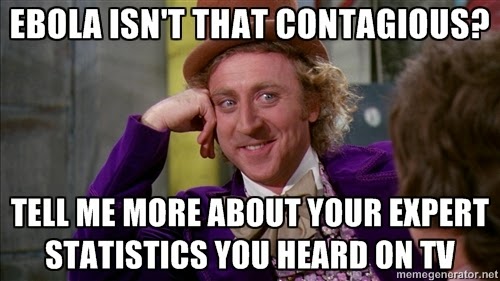 There's an arrogance that I just can't understand on the part of these healthcare workers, and others who suddenly fancy themselves experts on infectious diseases, just because they heard on the news that it's not that easy to catch. I've had well-meaning friends quote all sorts "facts" about ebola in the last few hours, but the truth is, we're still learning about what the most effective protocols are when it comes to Ebola.  No, it's not time to panic. It's not the end of the world. But an abundance of caution is most certainly in order until we lock this thing down, there's still a lot we don't know about how this disease is spread.

So, for anyone who thinks it's okay sit there, safely ensconced behind a computer screen thousands of miles away from NYC, dismissing the concerns the others, maybe you should hop on the next plane and volunteer to help. If you're not worried about catching anything, by all means, we can put you to work!  You can be the one to wipe down the subway cars and help disinfect the bowling alley where this guy spent some time just hours before he went into the hospital with 103 F fever.  How does that sound?

And the winner is....Wasabi Ginger!

Congratulations to Meneko Spigner McBeth, the winner of the Lay's Potato Chip Flavor Contest. The winning entry was Wasabi Ginger, which was also my pick to win.  It was, by far, the favorite for my family.

In case you missed my previous blog posts, here are links to my reviews for each finalist:

I recently came across an article on the site Mic.com, listing the "11 Powerful Netflix Documentaries That Will Change How You Think About Food."

A couple of them I'd seen before (Food, Inc and Super Size Me) but the others weren't familiar to me, so I've started watching them.

Hungry For Change had lots of great information about how our dietary choices directly affect our health and well-being.  There's a website and a book that correlates with the movie, but according to the reviews I've seen, all of the info you need is already detailed in the movie itself. One of things I found most informative was the differences between our food supply now versus 50 years ago.  Foods are shipped longer distances, and are filled with preservatives and chemicals to make them more shelf stable.  Everything has added sugar these days, and the experts cite several examples of just how addictive those additives can be. The experts featured in this documentary were a mix of medical doctors, academics, nutritionists, and authors, so it was lighter and more entertaining than some of the heavier food documentaries out there.  Interesting stuff, and definitely worth seeing.

You can watch the trailer here:

The other documentary I watched today was Forks Over Knives.  I liked that one because it focused on extensive research.  There were some gory surgery scenes (totally unnecessary, ugh!) but it was worth it to learn more about the life's work of two researchers, Dr. T. Colin Campbell (PhD) and Dr. Caldwell B. Esselstyn (MD).  One took a medical approach to researching the link between high consumption of animals fats and cancer, while the other took a clinical approach.  Eventually, the two men meet and find that their independent research matches up, validating one another's findings.  Several other experts are also interviewed, along with real-life stories of people who reversed their serious health issues just by changing their diet.

You can see the trailer here:

I just received an email that purports to be from Facebook, advising me that if I don't go check my unread messages they will be deleted. 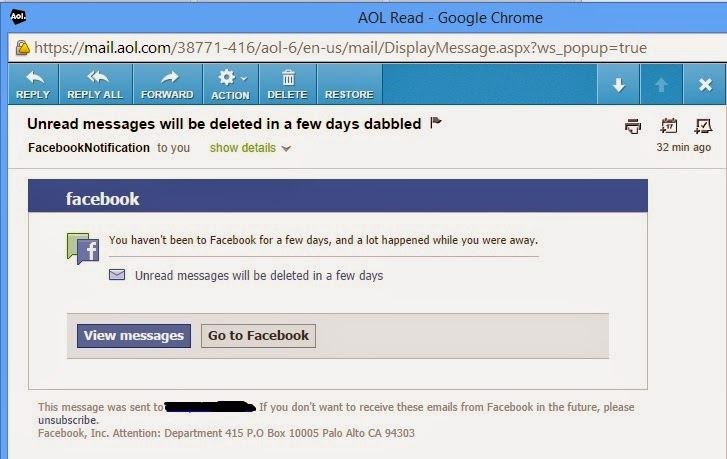 I didn't fall for it, because 1) it came through my email address that has never been affiliated with Facebook and 2) it says "You haven't been to Facebook for a few days, and a lot happened while you were away"

I use Facebook frequently, so I knew that this was bogus.  Be on the lookout and don't fall for this kind of phishing scam.  Even if it looks legit, never click to a site through an email link...go to your browser and enter the web address yourself.

Another tip: if you ever get an email you're unsure about, just hover your cursor over the sender name and the actual sender's email address will be revealed.  Here's what it said when I hovered over "FacebookNotification": 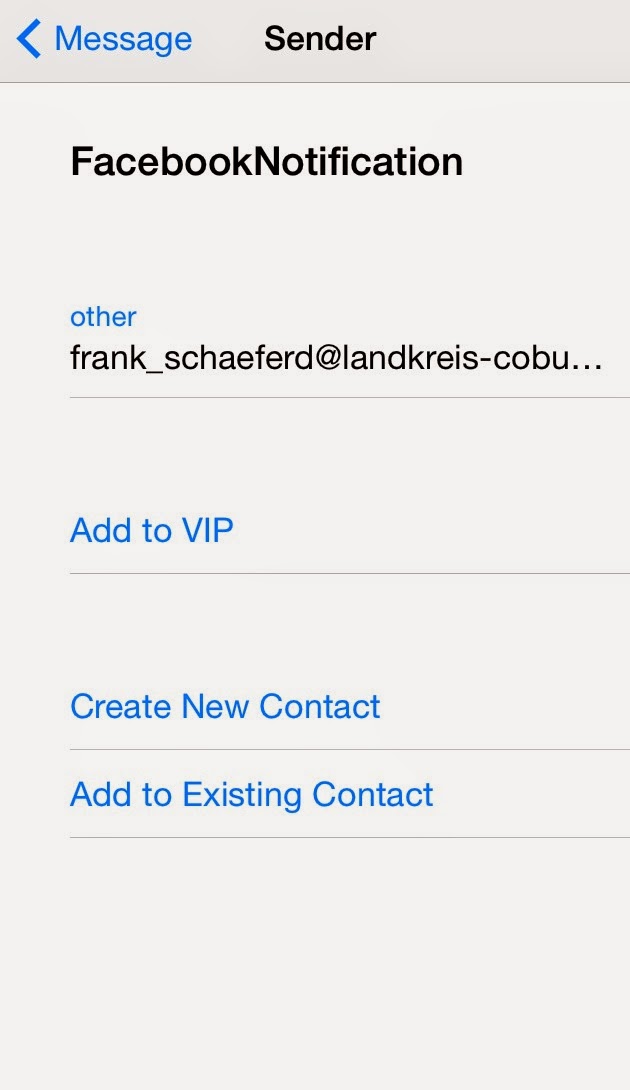