I bought this "Cheese Chase" toy yesterday for Leo, our new kitten, and he LOVES it.

Unfortunately, I bought it at Petco, and paid $24.99, and just found it on Amazon for half that price.

Ah well.  He's been playing with it constantly, so it was worth every penny. But if you want one for your own cat, head on over to Amazon for the best deal. 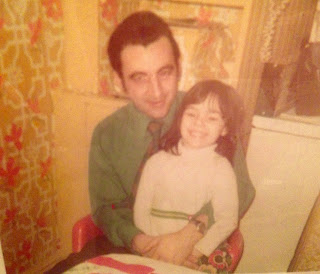 As we celebrate the 50th Anniversary of the Moon Landing, I want to tell you about my Dad.

He wasn't an Apollo 11 astronaut, and he wasn't famous, but he was there with Neil Armstrong, Buzz Aldrin, and Michael Collins when they arrived on the Moon 50 years ago today.

My dad was an electrical engineer working for Grumman in Bethpage, NY during the 1950s & 1960s, designing circuit boards for the Gemini and Apollo space missions, including the lunar module that went to the Moon.

Dad's name, along with the names of the others who worked on the project, as put on a piece of parchment. The Apollo 11 astronauts brought that parchment with them and left it on the Moon.

I was too young to remember the Moon Landing itself, but throughout my childhood, I would look up at the night sky and smile, knowing my Dad's name was up there.

My Dad died in 2006. He's not here to celebrate the Moon Landing 50th, but it still brings me joy knowing that a part of him lives forever on that glowing satellite 238,900 miles away.