Oh yes, I did: I watched the premiere of Sharknado 2: The Second One last night on SyFy.  Why?

Because every now and then, your gray matter deserves a chance to check out and veg for awhile. And movies like Sharknado 2 are, in fact, a vacation for your brain.  It's best if you don't try to actually think while you're watching it, though. (But...everyone is talking about sharks in tornados as if that's a real thing! And, she's using a buzz saw as a prosthetic limb with no discernibile electrical source! And, he's falling from the sky at a tremendous rate of speed, yet still managed to catch a moving chainsaw! Shhh shhh shhhhhhh......hush now, my dear cerebral cortex, you just lay back down and rest that frontal lobe of yours. This is no time for reasoning and higher thought processess. Settle down.)

The best part about the movie is not the plot (what plot?) or the incredible special effects (uh, no) or the frightening plausibility that this could actually happen (Sharks. In. Tornados.)

No, the thing that makes this movie so much fun is that the actors involved are in on the joke. They know they are participating in a vehicle that is so-awful-it's-classic, and their only goal is to entertain their audience with the absurdity of it all.  And boy, do they deliver!

He's very dark and pensive. You can tell because he's frowning darkly and pensively.

Sure, Meryl Streep can do accents and show emotion and convey deep, complex feelings with just her eyes, but is that acting, really? The blank stares, the monotone delivery, a buzz saw for a hand...those are the marks of a true thespian!

A special shoutout to all of the truly inspired cameos in this sequel: Judd Hirsch of Taxi as the cab driver, Robert Hays of Airplane as the doomed pilot, Billy Ray Cyrus of "Achy Breaky Heart" fame as a gifted surgeon, and Bronx-born comedian Robert Klein as the mayor of New York City. Kudos to the casting director!

I also enjoyed the movie's penchant for killing off its guest stars in spectacular fashion--is there anything more satisfying than seeing purple-haired reality star Kelly Osborne and gossip diva Perez Hilton suddenly become shark food?   No, I think not.

Best of all, SyFy has already announced the release of Sharknado 3, coming in 2015. My weary brain is looking forward to it already. 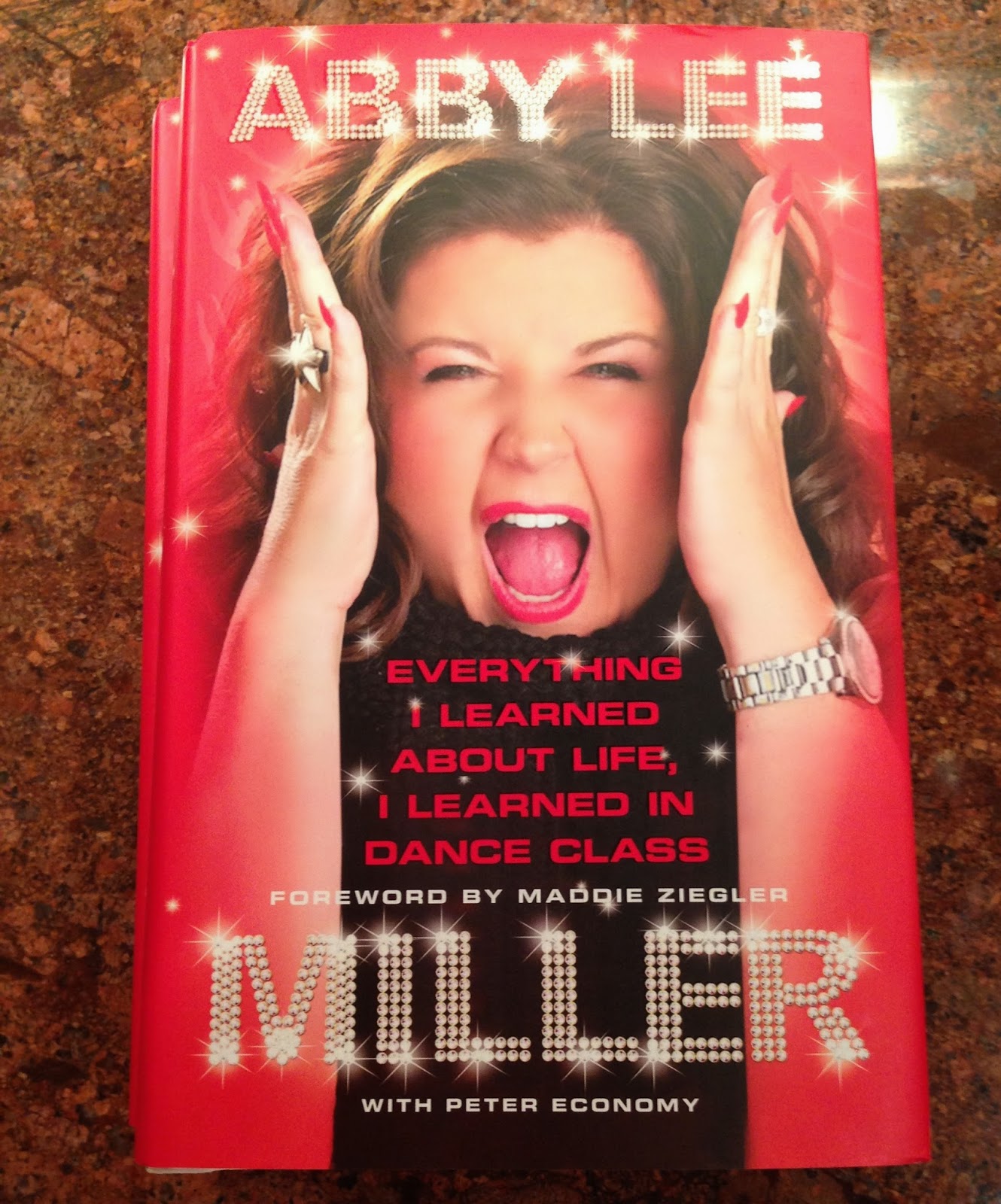 I've been trying to come up with some fun, memorable things to do with my 14-year-old daughter this summer, and when I saw that Abby Lee Miller of Dance Moms was coming to a local bookstore for a book signing, I knew we had to go meet her.  My daughter is a huge fan of the show, even though it makes me cringe to see Abby's "tough love" teaching style.  She certainly gets great results with her students, but as a mom, it's difficult to watch.  Nevertheless, my daughter enjoys the show, and now that her older sister/viewing buddy is away at college, I've been watching the show with her. 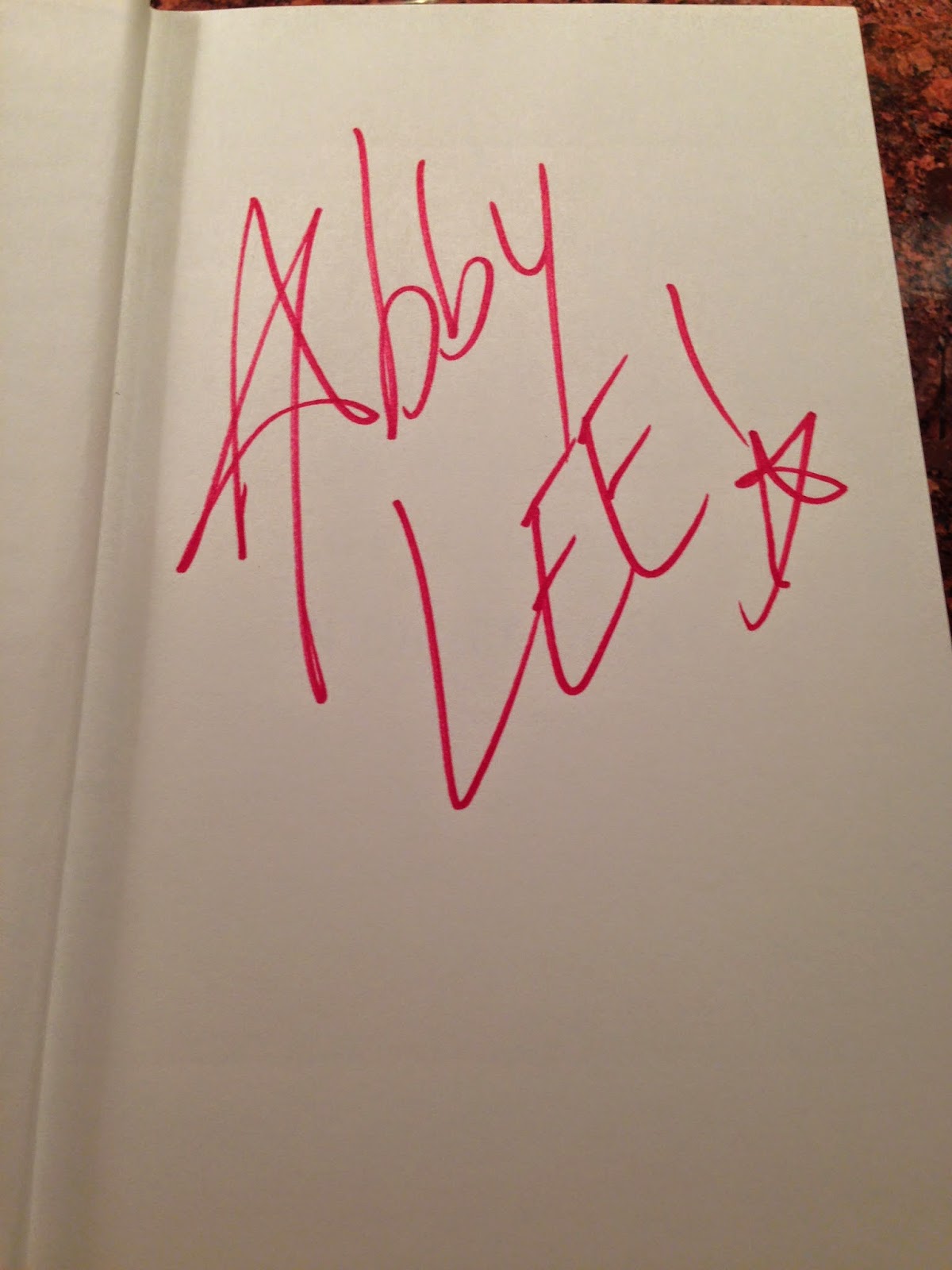 It was definitely an adventure. First, we had to buy the book in advance in order to get wristbands for admittance to the signing. Then we had to wait outside for more than two hours in 90-degree heat--and then a thunderstorm--before we could get inside the store.  Then it was another 40 minutes of waiting in a non-air conditioned basement room to get our books signed and a photo op with Abby. 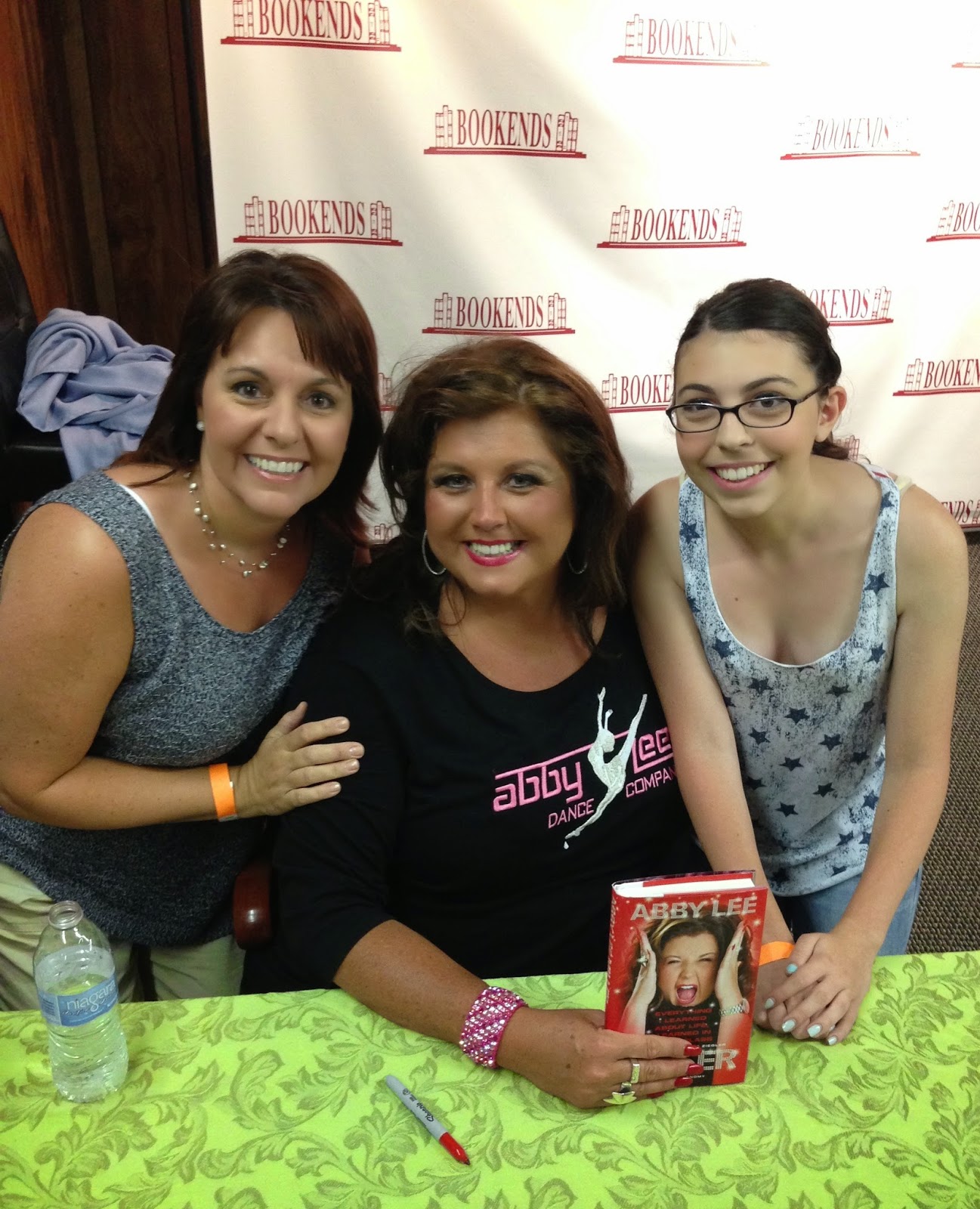 As we neared the front of the line, we saw Abby chiding the bookstore owners for the huge fan they had blowing on her. It was sending her hair billowing in her face while she was trying to sign the books and take photos, so she stood up and made them adjust things before she would continue. It was exactly the kind of Type-A behavior we've seen from her on the show, and it was great to see her in action up-close.  And I tell you what--she was 100% right, that fan was ridiculous, and it was sweltering down there in the signing room.

I decided while I was standing in line (lots of time to think, you know) that I wanted to get a picture with her that imitated her "screaming" face on the cover. It really is an eye-catching photo for a book cover, and I thought it would be fun to replicate that. My daughter was mortified, but Abby was a great sport. She made me "take a nice one first" and then my daughter slinked out of the shot while Abby and I hammed it up. 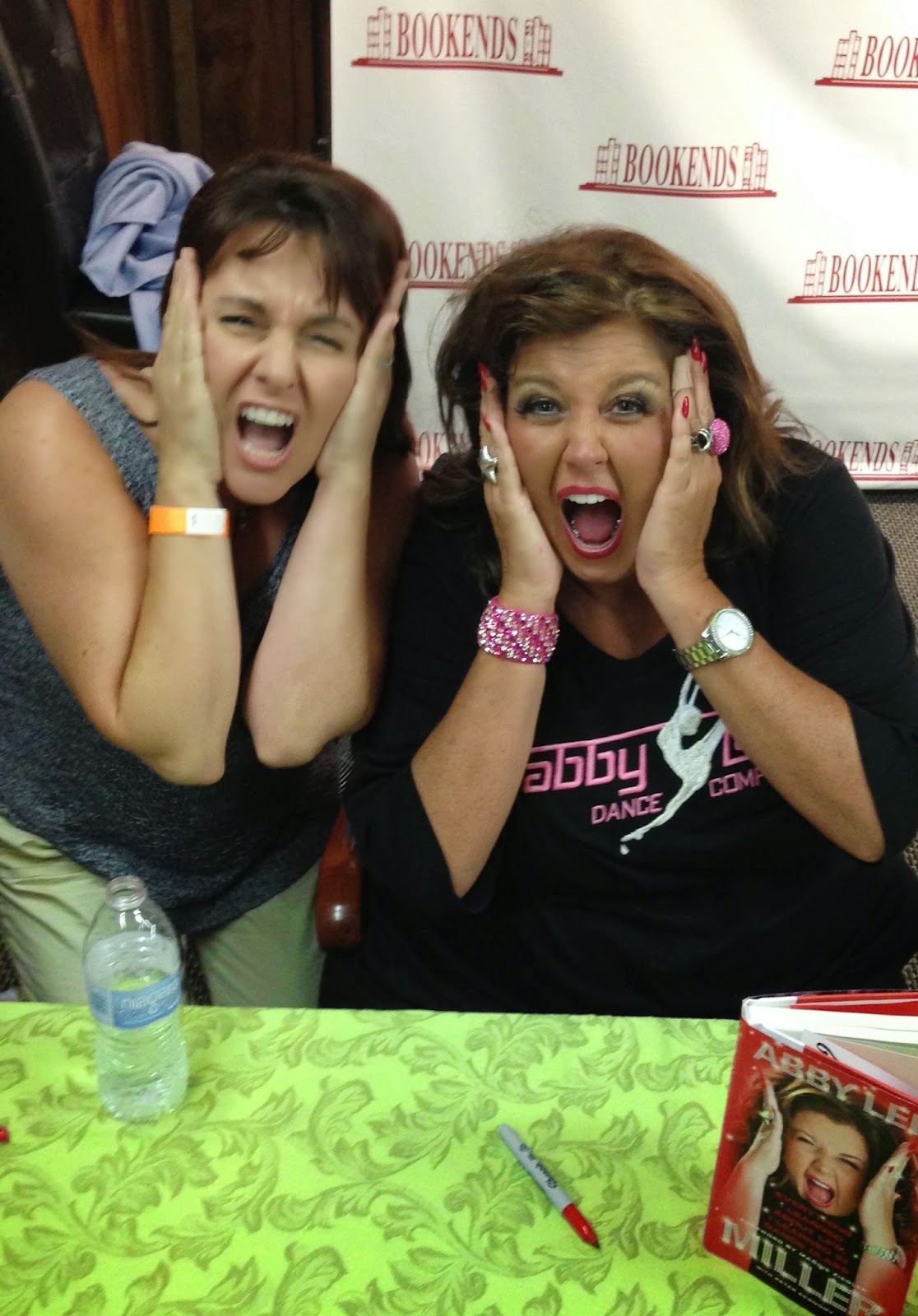 All in all, an unforgettable experience--exactly what I was hoping for!

A good friend of mine participated in one of those Moth monologues a couple of years ago. It was released today, and is absolutely hilarious.  It's also poignant, and speaks to expectations versus reality when it comes to family. The monologue is titled, "Listen Here, Fancy Pants!: A white collar son makes peace with his blue collar father."

It's free to listen on iTunes, just CLICK HERE and choose #4

Or, listen to it on The Moth website HERE

I promise you, it's worth your time! 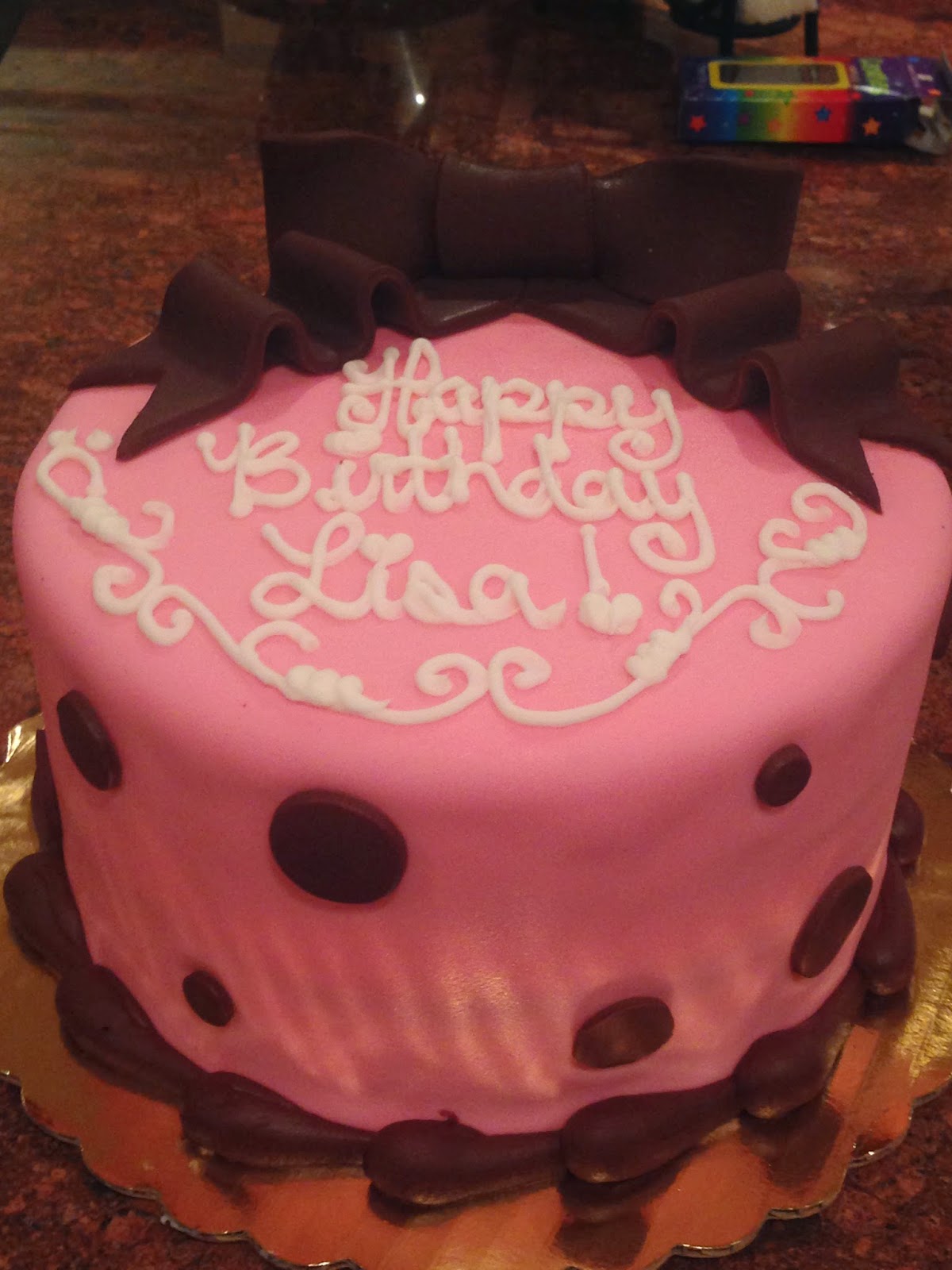 Whenever we have a birthday in our family, it's always my job to bake the celebratory cake.  Unfortunately, that means I also have the responsibility of baking my own birthday cake when my big day rolls around each year.

This year, I decided to give myself the day off, and treat myself to something special: a cake baked by Carlo's Bake Shop, made famous by the popular TLC reality show Cake Boss, featuring baker Buddy Valastro.

We visited the satellite location in Ridgewood, New Jersey (the original store is in Hoboken, but there are other locations cropping up now throughout the state).  Since this was a spur-of-the-moment thing, I didn't get a custom cake made, but it really wasn't necessary--there were several beautifully decorated pre-made cakes to choose from.

I eventually went with this little beauty, which has chocolate ganache mousse sandwiched between yellow cake and chocolate cake, topped with a thin layer of buttercream, and covered in pink fondant and decorated with brown fondant dots and a huge fondant bow.

So, did it live up to the hype?  Well, visually, yes, it was absolutely worth the trip to see the beautiful cakes, and get a photo of the iconic striped awning outside that I've seen on the show so many times. As far as taste, though--good lord, it was a bit too sweet for me.  I guess I'm just not a big fan of fondant. It looks great when it's molded into a decorative design, but it's pretty much pure sugar, and I like frosting that melts in your mouth.  Fondant is a little chewy.

Overall, I'm still glad I treated myself to a genuine Carlo's cake, but I'm not sure I would do it again. The cost was a bit steep--close to $50 for the small cake I purchased--and just a few days later, I bought a much larger cake for my daughter's birthday at my local supermarket bakery for less than half the price. They also sell Carlo's cakes in the frozen baked goods section of my local supermarket, but I can't even imagine that being worth it. The real pleasure was in making the trip to the bakery, seeing and smelling all of the wonderful items they had for sale, and getting a cake that baked fresh as opposed to frozen.  And, truth be told, the less expensive cake that I purchased from the supermarket, with its soft buttercream frosting and a fresh strawberry filling, was a much bigger hit with our family. In the future, I might still buy a Carlo's cake if we're having a fancy party and I want to impress people, but I would stick with a really small one and purchase a larger sheet cake from the grocery store as the main dessert. 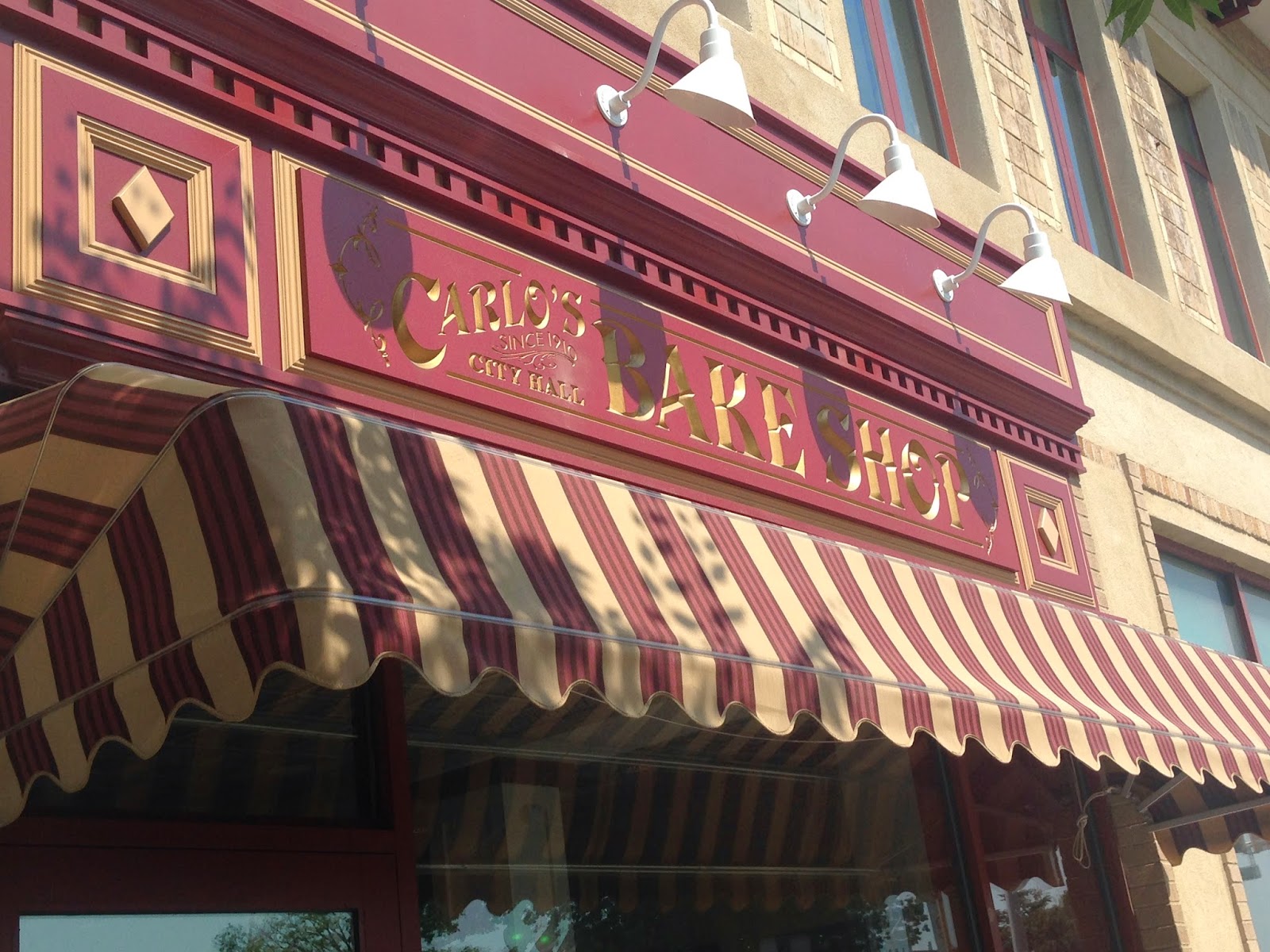 Reflections on the Fourth of July 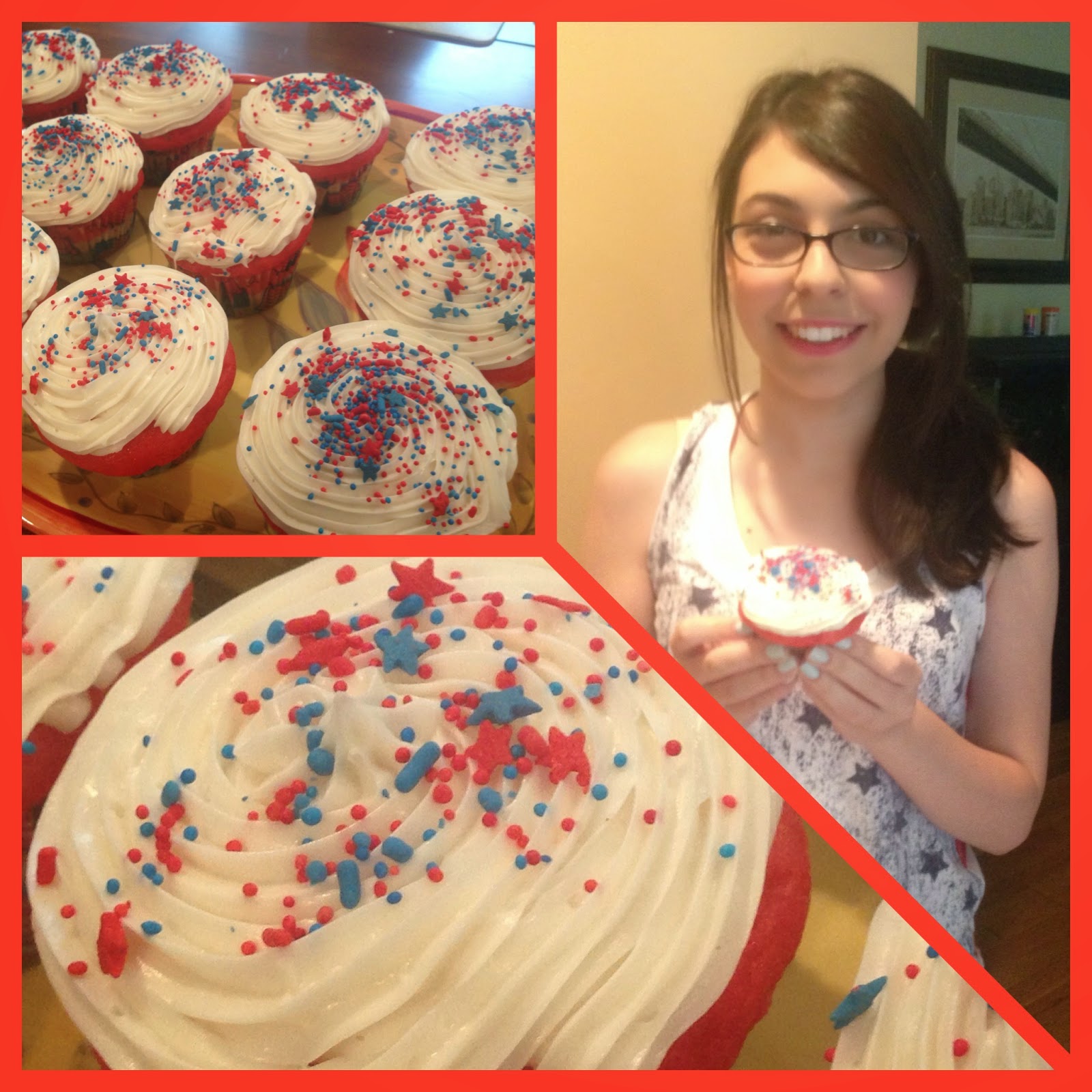 Today is Independence Day, a national holiday in the U.S. celebrating our declaration of freedom from tyrannical rule 238 years ago on July 4, 1776.

We're having some rainy weather here in the northeast, so it has been a low-key day spent watching the FIFA World Cup and enjoying quality time with my family.  I also made some red, white & blue cupcakes, because I'll take any excuse to make baked goods!

I wanted to share a blog post by a good friend of mine, Michael Lee. He wasn't born in the United States, but he lives here now, and his reflections on "The Essence of the Fourth" really hit home for me today.  It's a timely reminder that true American values are--and always have been--Freedom, Justice, Liberty and Equality for ALL.  I hope you'll click through, give it a read, and enjoy.