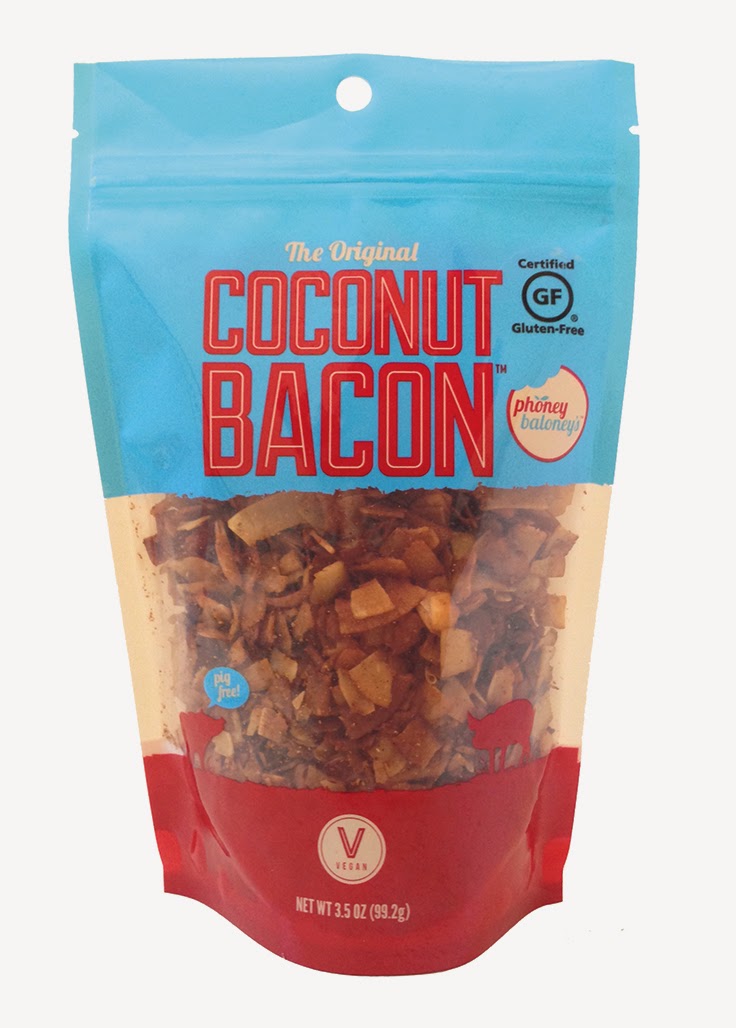 When I saw this at Fresh Market, I couldn't help myself--I had to try it.  I'm not a vegan, but I am always on the look out for healthier alternatives to my decadent food favorites, and I do love coconut, so why not?

It was...interesting. It certainly does have a flavor that is similar to the saltiness and smokiness of bacon, but there is definitely the flavor and texture of coconut that is unmistakable.

It wasn't awful, but it was not bacon, and would never be mistaken for such.  Still, if you are a vegan or vegetarian and you're craving bacon bits on your salad, this is a fine alternative to the chemical-laden manufactured variety that has been available for years. 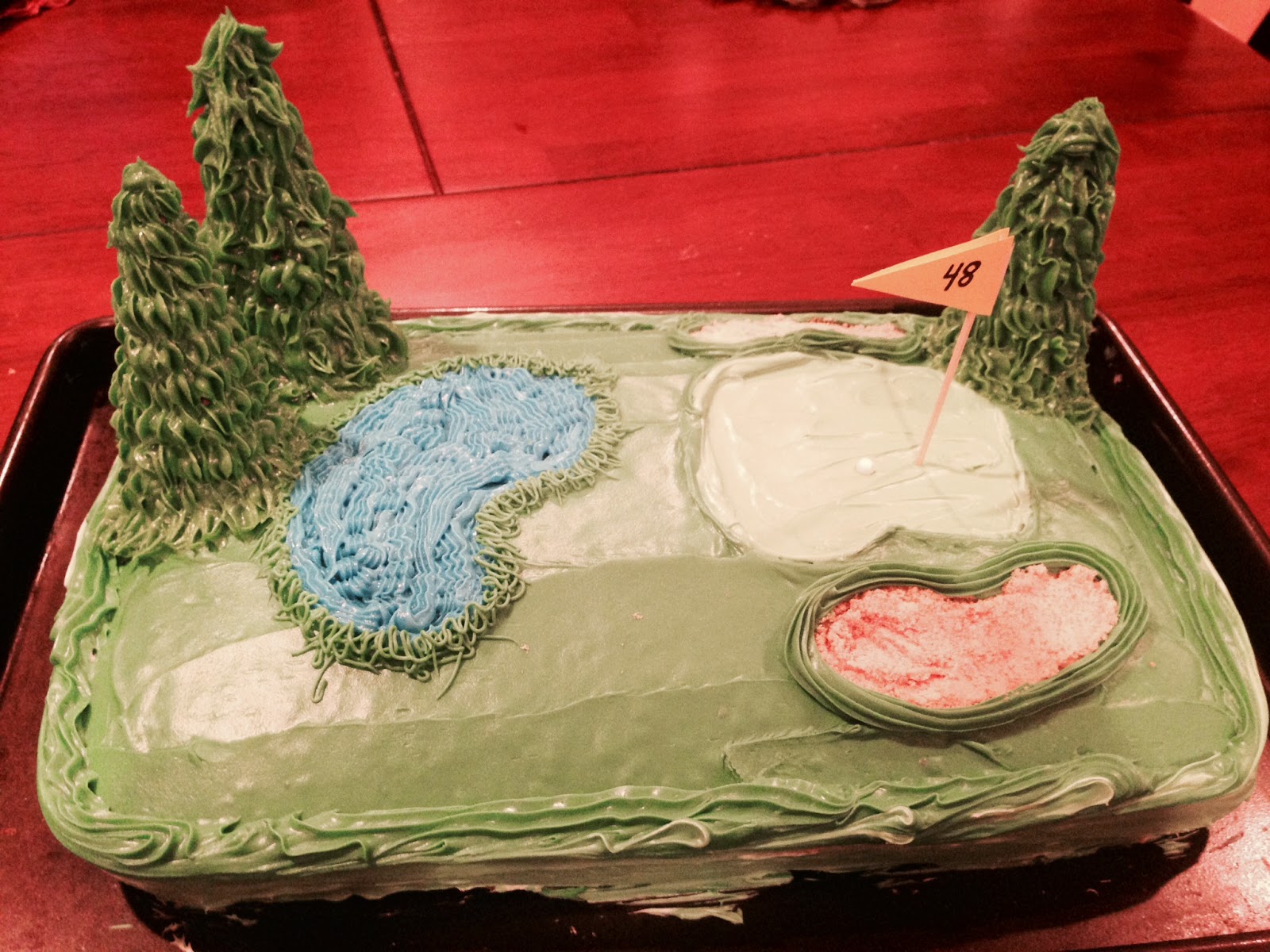 This year, my husband's birthday and Father's Day occurred on the very same day, which called for a very special birthday/Father's Day cake.  My daughters and I decided to create this golf cake, in honor of his favorite hobby.

I used crushed Nilla wafers for the sand trap, a pearl candy bead for the golf ball, and a long toothpick with flag made of yellow card stock to display his age. The trees are ice cream sugar cones turned upside down and decorated with dark green icing using the flower tip. The water is blue Funfetti icing using the basket tip, and the various shades of green were achieved using dark green icing, light green frosting and mixing them both with fluffy white icing.

I've seen numerous versions of these floating around on the web, but wanted to share my version for those of you looking for a "peanut-free" version.
The original concept is simple: top a cupcake with an upside down peanut butter cup, and top it off with a square of chocolate or a chocolate-covered graham cracker.

The problem is, my daughter has several classmates with severe peanut allergies, so her school is a peanut-free zone.

For my version, I made the cap out of solid chocolate, using a peanut butter cup mold for the base, and a silicone mini-brownie mold to make the tops. All it takes it a small dollop of chocolate in each brownie mold, then tap it gently against the table to flatten out the chocolate so that the square comes out nice and thin. 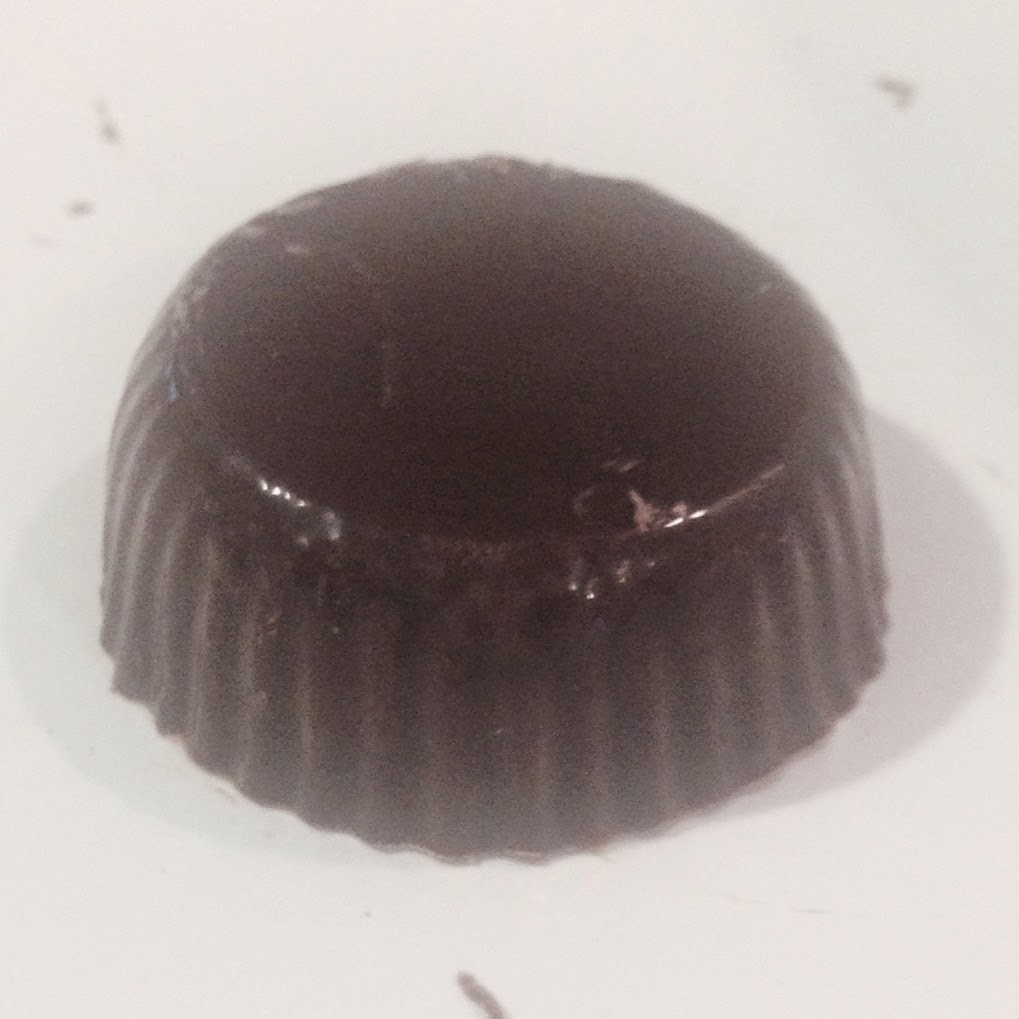 Then I used white decorating gel icing to draw the tassel. I added sprinkles and sugar crystals in the school colors to customize them. They were a big hit! 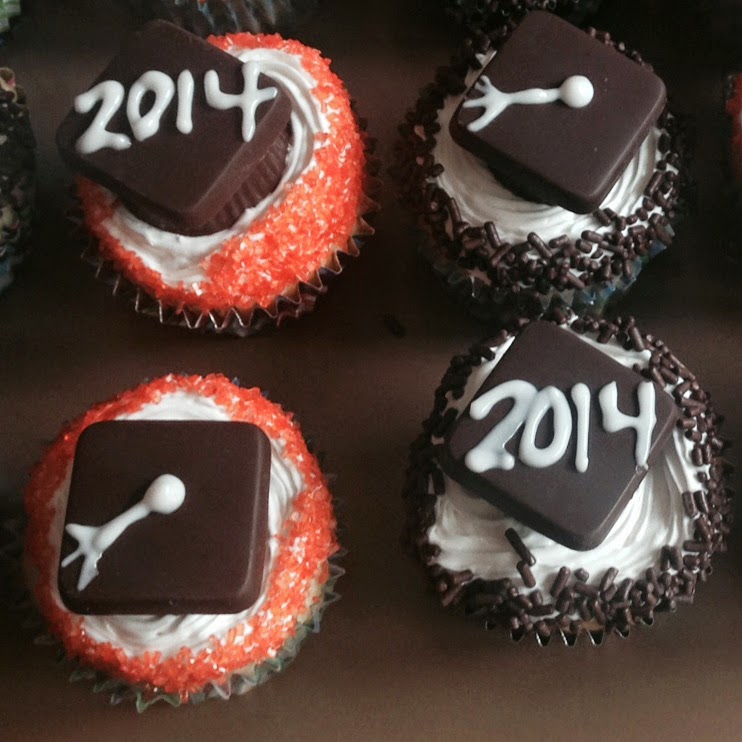 As a mom of three, I've done more than my share of baking for school events and birthday parties. I've tried every type of frosting out there, and by far, Fluffy White gets the most compliments whenever I use it.  It has the perfect consistency, a subtle marshmallow flavor that does not overpower the item it's frosting, and you can add coloring to easily customize it. It pipes well, and holds up for days in the fridge if you want to bake a few days ahead of time. 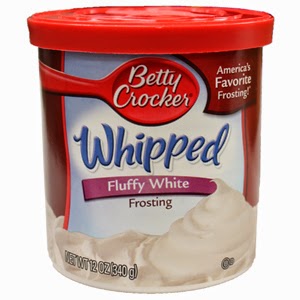 Up til now, I've always opted for the Betty Crocker store-bought brand--nothing could be simpler than heading to the grocery store and picking up a container at the supermarket.

Or so I thought.

Then, I found THIS RECIPE on AllRecipes.com for Homemade Fluffy White Frosting. Wow--game changer!

When I'm in a hurry, I will still revert back to the Betty Crocker version, but I have to admit, this homemade version tastes almost exactly the same, and is very simple to make IF you have a stand-mixer.  Here's the recipe, if you're not inclined to click through, along with some helpful tips:

Mix the first 3 ingredients in a saucepan and heat until bubbly and sugar is dissolved. (Don't take it off too soon--wait until it's boiling rapidly and you see bubbles forming on the surface of the syrup. It won't be thick, just really hot!)  Take it off the heat and let it cool down a bit.

In a large mixing bowl (preferably a stand mixer, if you have one, since you'll be whipping this for a while) combine the egg whites and vanilla and beat until soft peaks form. (I took it a bit further than "soft" because I read in some reviews for this recipe that some people had trouble with getting the finished product to thicken up.)  Then gradually (I'm talking a really slow drizzle here) add the syrup into the whipped base. Once all the syrup is incorporated, crank up the mixer to high for a couple of minutes, until the frosting is thick and fluffy. NOTE: This homemade version is somewhere between the consistency of frosting and store-bought Fluff spread. It pipes just like frosting, but it does get a little sticky after a few hours.


A few other tips:

Make the sugar syrup first, and let it cool down a little before adding it to the whipped egg white & vanilla mixture. As it is, the frosting turns out a little warm at first because of the hot syrup, and it pipes better when it's cool.

Use a stand mixer and drizzle in the syrup very slowly--this will give you the perfect consistency, and will keep the hot syrup from breaking down the whipped egg whites. 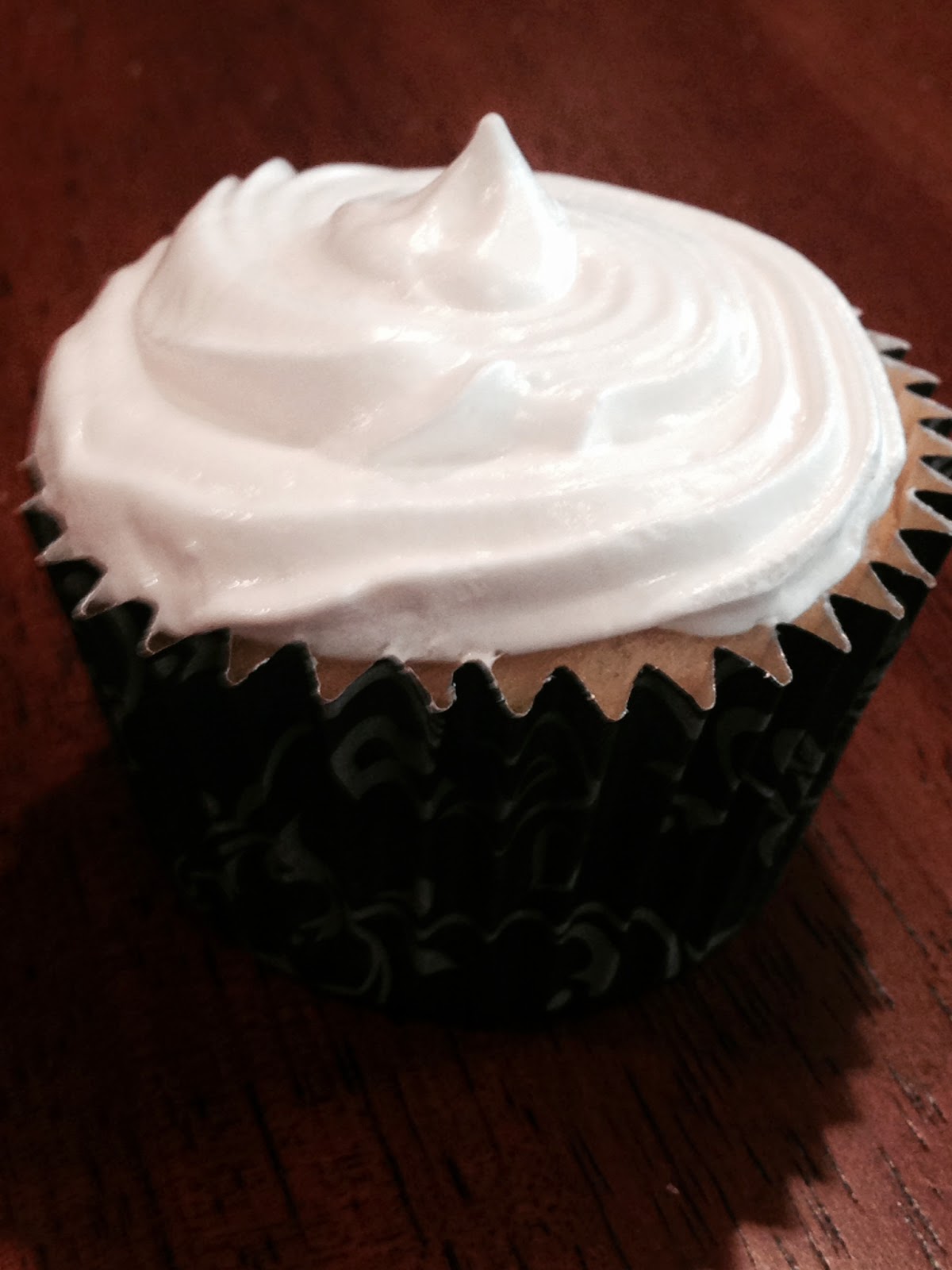 The recipe says that adding the syrup to the whites should take 7 to 10 minutes, so don't rush it. During that time, you might be thinking it's easier to just buy your own frosting, but if you factor in the drive to and from the grocery store, this is still faster. Once all the syrup is in, just crank the mixer up to high and take a few minutes to wash the pot you made the syrup in, and it'll be perfect before you know it. The key is to get lots of air whipped into the frosting so that it builds volume and earns the name "Fluffy".

Put the frosting in the fridge real quick just to cool it down a bit before you start piping it onto your cupcakes. If you're just spreading it on, then by all means, have at it right away.  Using this recipe, I had more than enough frosting to generously cover 24 cupcakes, and had at least a full cup of frosting leftover (closer to a cup and a half).  The final product tastes just like marshmallows--similar to store-bought Fluff but not nearly as gooey, and without all the chemical preservatives.

Our Robins Have Flown the Nest

Several weeks ago, I noticed a robin building a nest in an evergreen tree near our front door. Then a couple of weeks later, there were 3 tiny blue eggs.  They eventually hatched, and my family and I enjoyed another two weeks of watching Mama Robin diligently tend to her babies, zipping around during the early morning hours, retrieving worms for her young.

Today, the nest is empty, and Mama Robin is nowhere to be seen. I'm grateful that we had the opportunity to share in this tiny miracle of nature. 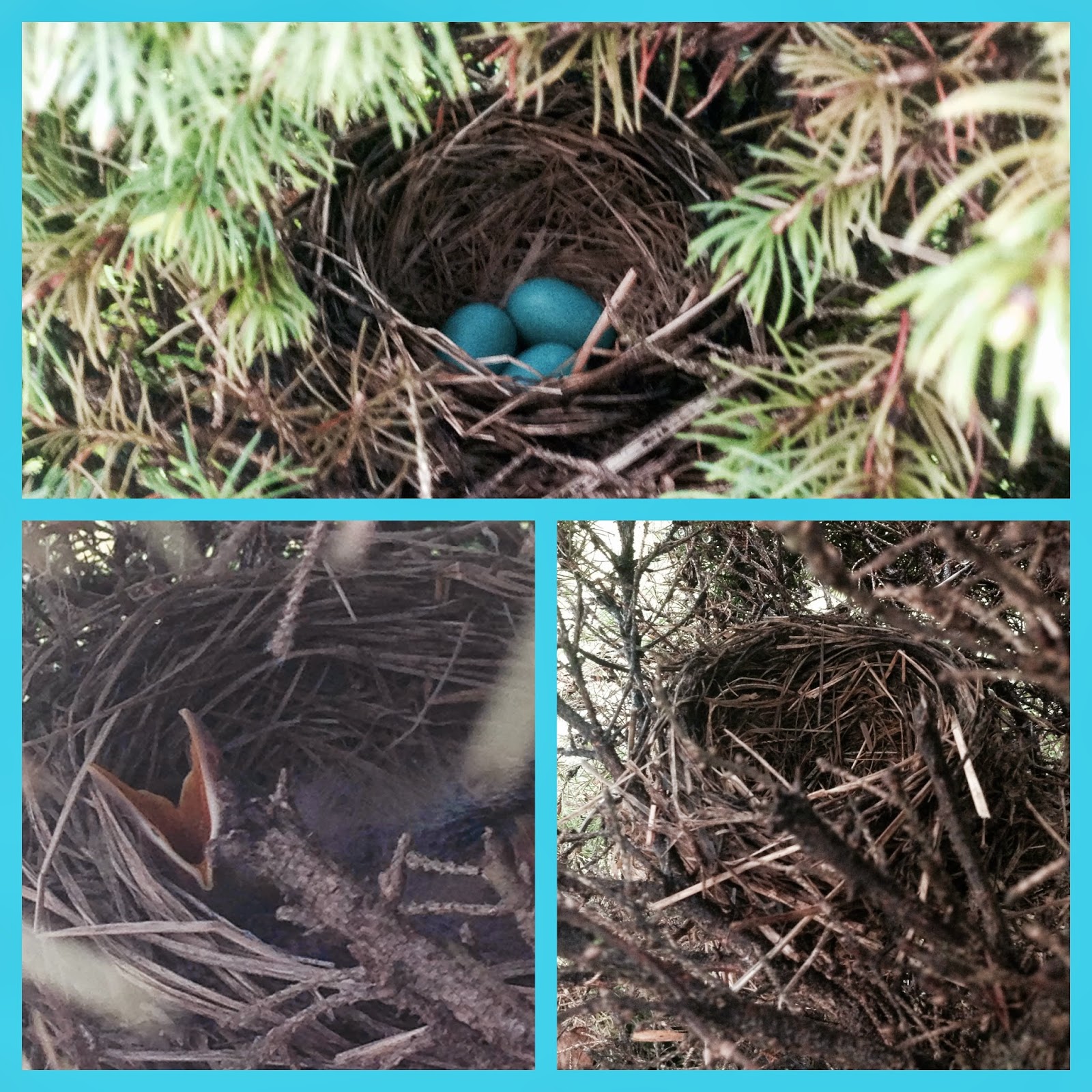